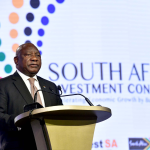 The best way to convince investors that his government will deliver is to remove the blockages that are hindering progress in the numerous reforms under way.

The tone was just right. President Cyril Ramaphosa didn’t try to sugar-coat our problems at the SA Investment Conference last week. He was direct about them, listing all the hot-potato issues that make investors wary, but balancing that by listing the progress made in the past year and expressing determination to fix the problems we face as a country.

That progress has been substantial. He was able to point to some notable achievements since he addressed the conference last year: the licensing threshold for embedded generation projects was lifted from 1MW to 100MW; the spectrum auction was completed last week; a unit is being established within the presidency to cut red tape across all government entities; and Transnet has carved out the National Ports Authority as a separate entity and will soon provide third-party access to its freight rail network.

While all of those “wins” still face obstacles, it is an impressive list, considering that most of those initiatives have been in the pipeline for a long time. The spectrum auction, for example, was originally scheduled for 2010, but the process was bogged down by numerous problems, mostly due to lack of political will, though it also faced legal challenges.

I thought Ramaphosa’s bluntness about our problems went down well with the audience, and the general mood was upbeat. He gave a refreshing, honest account of what needs to be done, which is important because investors must be aware of the challenges they face. The president invited them to assist in overcoming these difficulties as the country continues along the path of reconstruction and recovery.

Business Leadership SA (BLSA) welcomes that invitation. Locally, organised business is fully committed to the reform and infrastructure programmes and has committed substantial time and resources to assist the state, particularly in improving capacity and providing expertise. Ramaphosa will find the more he delivers on his promises, the more support — and investment — he will generate.

The pledges rolled in. Ramaphosa said global investors had pledged R332bn to help SA with its economic reconstruction and recovery plan and that the total level of investment pledged at the four investment conferences held so far amounted to R1.14-trillion. That’s 95% of the five-year target of R1.2-trillion he set at the first conference in 2018.

Of course, much of that will remain nothing but pledges if the investors don’t believe the environment can be transformed into one that is conducive to economic growth and job creation. It’s now up to the president and his cabinet to deliver — as a team, with no more contradictory statements.

The best way to convince investors that his government will deliver is to remove the blockages that are hindering progress in the numerous reforms under way. Here the work of the new “red tape” unit and the presidency’s Operation Vulindlela, which works with the National Treasury to accelerate the implementation of reforms, will be crucial.

Broadly speaking, Vulindlela aims, through the reforms, to fix problems in the country’s energy, water, rail and port systems, among others, to enable markets to operate efficiently. The red tape unit’s aim is to streamline government processes so that interactions with businesses are quick and efficient.

The government is in effect trying to improve both the state’s infrastructure and its standards of service to develop the type of environment that will not only attract more foreign investment but also boost local businesses, both big and small, in dramatic ways.

For small businesses the time and costs of bureaucratic processes are particularly burdensome. Microbusinesses typically have low levels of entry and competition is fierce. The entrepreneurs who run them have to focus full-time on matters that generate revenue, and the inordinate delays in getting any sort of approval, permit or licence from their local municipality is a severe impediment.

Big businesses will benefit from having a secure energy supply and a water-secure future, with improved infrastructure and transport logistics. Just this month, both Exxaro and Thungela reported handsome earnings, which could have been even better, generating more tax revenue for the state. Due to Transnet’s logistical constraints, they were unable to export all their coal, so Exxaro saw a 37% decline in its export volumes and Thungela’s were down 16% at a time when coal prices are at record levels.

Mining is a cyclical industry and companies need to be able to capitalise fully when prices are buoyant so they are in a better position to ride out the inevitable downswing. These are exactly the type of problems we need to fix.