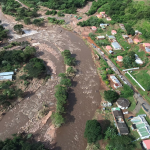 My heart goes out to the loved ones of those who died and to those who are still searching for their missing family and friends.

BLSA supports the declaration of the flood-hit areas of KwaZulu-Natal as a state of disaster. The devastation is terrible and we need urgent interventions to provide relief and minimise the damage, estimated to run into billions of rands.

Monday alone saw more rain than would typically fall over several months and unfortunately, these kinds of extreme weather events are going to become the norm as a result of climate change, with reports indicating that the eastern parts of the country will receive more rain but the west will dry up.

We need to respond to this crisis with both immediate relief measures and a long-term plan to mitigate those and other effects of climate change, including rising sea levels. We know this kind of thing is going to happen again and we need to ensure we establish appropriate emergency response measures.

Declaring KwaZulu-Natal a disaster zone immediately releases funding for people who require emergency relief as well as for repairs, and it enables centralised coordination of the all emergency services as well as the SAPS and metro police. It also enables assistance from other organs of state and other provinces.

Those are the existing measures we have for emergencies such as these and they seem strong. And the SANDF has already been called in to assist. But I hope experts are brought in to assess whether our overall emergency response system needs to be updated to account for climate change.

One important aspect that is not there is support for the uninsured or underinsured. Thousands have been left homeless and many more have seen extensive damage to their properties.

Most households have had to cut costs due to the destructive effects of Covid-19 combined with rising inflation, underpinned by soaring fuel and electricity prices. In times of financial distress, insurance often seems like a luxury and many households will have been forced to take the risk. Because extreme weather events will be happening more frequently, perhaps a Sasria-like structure may be called for, which insures against special risk such as politically motivated violence, malicious acts, riots, terrorism and public disorders. That saved the country from far more extreme financial consequences of the July unrest.

Another factor that this crisis in KwaZulu-Natal has highlighted is that it’s necessary to put in place a system, possibly through a new agency, to ensure that the infrastructure needed to respond to emergencies is in place and in working order, with regular maintenance checks.

Our emergency services were unable to cope with the flooding. Durban’s emergency call centre was overwhelmed on Monday night while thousands were stranded, in need of emergency assistance. In many areas across the country, our municipalities are largely dysfunctional, unable to provide basic services. We need to equip them to be able to cope with emergencies.

Upgrading our long-term response to emergencies caused by severe weather events is something we clearly need. Now, BLSA is working to do what it can to immediately assist those affected by the floods. My heart goes out to the loved ones of those who died and to those who are still searching for their missing family and friends.

BLSA and other business organisation are communicating with the authorities on how we can provide further assistance to emergency actions we’ve already undertaken. Business Against Crime SA, a division of BLSA, has been instrumental in co-ordinating rescue activities through its Eyes and Ears Campaign, a joint crime-fighting initiative with the police and private security companies. Police informed BACSA’s KwaZulu-Natal office that 35 pupils and 15 teachers were trapped in a school in Hillcrest. Cut off by the floods, they hadn’t eaten in two days. BACSA contacted Fidelity Security and within hours its helicopters had dropped emergency supplies at the stranded school before uplifting the stranded people to safety.

That is an example of how effective we can be as a country when organs of state and the private sector co-operate in joint initiatives and BLSA is ready to provide further assistance to the government in its overall response to this crisis.

*Mavuso is the CEO of BLSA. This article first appeared in Fin24.