The E2 initiative will continue to provide relief in the affected areas. We call on members of the public, government, civil society and businesses to lend a helping hand during these unpredictable times.

As KwaZulu-Natal continues to experience turmoil and devastation caused by the recent heavy rains and floods, Business Against Crime South Africa (BACSA), through the Eyes and Ears programme (E2) together with Fidelity Security and the SAPS have worked together to provide relief.

The E2 programme is an official joint crime-fighting initiative between the BACSA, SAPS and the Private Security Industry (PSI) whereby the PSI formally cooperates with the SAPS by relaying information directly to provincial operational command centres (POCC) while also receiving information from the SAPS.

On 12 April 2022, 15 teachers and 35 pupils from a school in Hillcrest received some much-needed relief in the form of food, water and blankets, after two days of being trapped on the school premises.

All the roads leading to and around the school had been washed away by the flooding and relief could only be supplied using a helicopter.

Ms Tebele Luthuli, managing director of BACSA, says that after receiving an urgent call from the E2’s KZN POCC, stakeholders from government, business, civil society and the SAPS came together and formulated a plan to get the food, water and blankets to the school. Through the assistance of BACSA, Fidelity Security was approached and asked to assist with a helicopter.

A flight plan was quickly hatched, with coordinates of the pick-up and drop-off sites. Before the meeting with the stakeholders was even concluded, relief to the trapped had already been delivered by BACSA and Fidelity.

The children and educators have since been removed from the school by emergency response services.

“Since the beginning of the heavy downpours it has been reported that approximately 253 people have died and many more are still missing. Our heartfelt condolences and prayers go out to those families who have lost loved ones and those who are still searching for their missing family and friends.

The E2 initiative will continue to provide relief in the affected areas. We call on members of the public, government, civil society and businesses to lend a helping hand during these unpredictable times,” says Luthuli.

Here are  images detailing some of the destruction along a river bank in KZN following the floods: 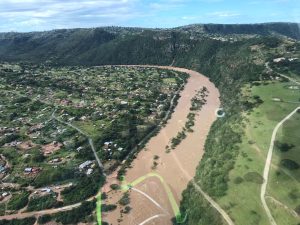 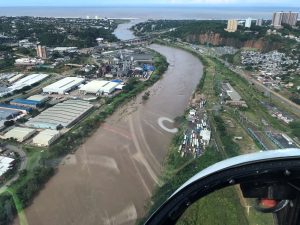 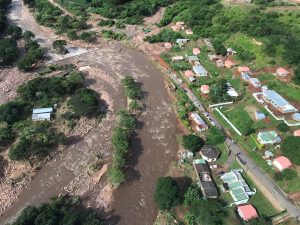 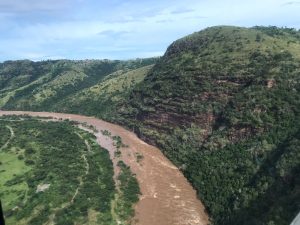