Home » Crime » BUSISIWE MAVUSO: Some high-ups must be sweating as they await that knock on the door 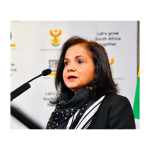 The fight against corruption, it appears, is now gaining strong momentum and BLSA fully commends Batohi and her team for the progress made under extremely challenging conditions.

A lot of people in high places will be sweating following the arrest of another of the primary instigators of corruption at Eskom during the state capture era.

Former Eskom acting chief executive Matshela Koko, along with his wife and two stepdaughters, were among those arrested last week on charges related to a multimillion-rand irregular contract for building the Kusile power station.

Slowly but surely the NPA is starting to reel in the big fish and it was refreshing to hear National Director of Public Prosecutions Shamila Batohi telling parliament’s justice committee last week that “the days of impunity are over. The very fact that people now will be wondering about when, not whether, but when the knock on that door will come is an important step in the fight against impunity.”

She followed up with the sentiment that “those suspected of corruption were already mentally incarcerated” but I suspect most South Africans would prefer actual incarceration. And of course, successful prosecutions are the most important element of ensuring that impunity ends and accountability begins.

The arrests of the Koko family and their fellow accused follow the court appearances in August of two former Transnet CEOs Brian Molefe and Siyabonga Gama, along with Transnet officials and private sector executives from Regiments Capital and Trillian Capital.

The NPA’s tentacles are also starting to reach into senior government level. At end-October Mosebenzi Zwane, former minister of mineral resources – and still officially an MP and chairperson of the parliamentary committee on transport despite having promised to step aside – is out on bail after being charged with fraud, theft, corruption and money laundering in relation to the R280m Estina Dairy Farm project in the Free State. His two co-accused are former executives of the Gupta-owned Sahara Computers.

I can’t heap enough praise on Batohi who has been under tremendous pressure to produce results from the day she entered office in February 2019.  That pressure intensified as more and more time passed with no significant arrests. Understandably so because South Africans are frustrated – they want to see those guilty of stealing billions from the state in orange overalls.

Batohi repeatedly emphasised the importance of building solid cases, which takes time. The investigation against Koko and his co-accused was launched in 2019. Failed prosecutions would be immensely damaging in the fight against corruption, bringing the risk of entrenching impunity forever. And most of the accused in these state capture cases of course appear well able to hire expensive lawyers to defend them.

Thankfully Batohi was given the time and space to conduct thorough investigations and we are now reaping the rewards. That time and space is not always extended to other organs of state and that highlights how important it is for executives, once appointed, to be able to operate independently without government interference.

The NPA itself and the Hawks were deeply infiltrated by state capture and that has made Batohi’s job far more difficult. Another state entity ravaged by state capture was SARS and it is slowly but surely rebuilding, with tax collections improving and its own crime-fighting capacity getting its teeth back, as evidenced by the preservation order against Gold Leaf Tobacco Corporation and its directors, which prevents them from selling assets while SARS pursues what it says are R3bn in unpaid taxes from the sale of illicit cigarettes.

The fight against corruption, it appears, is now gaining strong momentum and BLSA fully commends Batohi and her team for the progress made under extremely challenging conditions. This momentum will hopefully continue following the encouraging announcement that the NPA’s Investigating Directorate will become a permanent structure.

The big test is still to come: successful convictions. Those would dramatically boost perceptions of South Africa from an investor’s point of view. But more importantly, the country needs to see justice being done: the perpetrators being jailed will be a dramatic morale-boosting moment for all South Africans who are sick of the widespread corruption this country is suffering.

Many have given up hope that corruption can ever be overcome. But if successful prosecutions of those implicated by the Zondo commission are accompanied by effective structures to combat future corruption, such as the anti-corruption agency proposed by Judge Zondo, it will help to rebuild faith in our future. Let’s hope too that the FATF notes this progress in our ability to investigate and prosecute complex fraud and money laundering when deciding whether or not to greylist our country.