POSTED ON: July 19, 2021 IN Latest news, Political economy by Admin 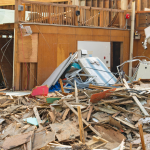 The cost of the economic carnage in KZN and Gauteng will be carried by the most vulnerable segments of South African society.

It is tragic that the highest cost of the economic carnage caused by protests in Kwazulu-Natal and Gauteng will in the end be carried by the most vulnerable segments of South African society.

Over 200 lives have been lost while the economic costs are immense and still being tallied up. We estimate that losses to our retail sector already amount more than R20bn. Over 200 shopping centres were looted and destroyed, with more than 800 stores looted and 100 burnt out completely.

As I watched both young and old run from stores with television screens and other goods, I thought of the many other South Africans at home watching events unfold who are going to have to pay a higher cost for this brazen criminality taking place under the banner of political protest.

Whether as part of a coordinated plan or not, logistics across the country have been disrupted by the protests in Durban and at the harbor, which is the most important for trade in southern Africa. Movement of goods will be disrupted not only in South Africa but across the region. There’ll be an impact on food security and medical supplies, which are critical in this war against the pandemic. Factories will not be able to produce and even those that can will face severe disruptions to supplies to retail distribution centres.

A priority is to find a solution to the Mooi River Toll Plaza protests on the N3, where matters began to spin out of control last week. While the incarceration of former president Jacob Zuma, stoked tensions in the area, there has been a long-running situation of mobs picking off trucks as they stop to pay tolls. It’s a situation that has gone on for too long and if the country is going to be more stable in the long run, this most critical transport route needs to eliminate this risk.

What I have highlighted is just the short-term economic risks that the country faces in the wake of the protests. It is clear that we are all going to be affected in one way or the other – as is evidenced by long lines outside petrol stations in our major metros. Over the medium to longer term, there’s going to be a steeper price to these events and once again, it will be the most vulnerable segments of our society that will carry the greatest burden.

The South African economy hasn’t grown beyond the 2% mark for about eight years now and has dipped into recession a couple of times during that period as confidence plunged during Zuma’s presidency amid tales of wanton corruption related to state capture. With growth so low, we have failed to attract investment and as a result make any significant inroads into on our unemployment crisis that today stands at its highest, 32,6%, in the 13 years that Statistics South Africa has tracked the quarterly figures. The pillaging that we have seen across our two most populous provinces is only going to lead to further job losses, adding to the socioeconomic pressures that have long been highlighted as a key risk to the country’s investment case. Government and the police have failed in their basic duty to protect their citizens and their property. The Kwazulu-Natal we see on our TV screens is being rendered un-investable.

It’s the perfect storm. The protests come as the country reels from a third wave of virus infections that has seen more than 4,000 South Africans die just in the past two weeks. The wave comes with its own costs, as President Cyril Ramaphosa has had to extend level 4 restrictions for two weeks.

Just how much the Covid-19 restrictions would have dented our economic rebound was still to be seen. The protests, however, make a bad July a disastrous one. It will also set back efforts to boost confidence levels in the country that in May were at their highest in three years. Without confidence and investment , the economic recovery plans mapped out by Ramaphosa last October face little chance of success. It is a key ingredient.

These are difficult times for our country. It has been pushed to tipping point as certain actors in our political theatre look to exploit some of our socioeconomic ills. While some of our larger companies will slowly recover from the ravages of the past week, it’s smaller businesses that are critical for the absorption of lower skilled jobs that will take much, much longer to recover, if they’re able to at all. And the people who are most vulnerable in our society, those with no savings and living in communities where further job losses will be most acutely felt, will suffer the most.