The message we give is one of optimism but it’s balanced – we give the good and bad news.

Before making an investment in South Africa, foreign companies often set up meetings with the relevant government departments as well as with BLSA and there’s been an encouraging uptick in the frequency of these recently.

They ask for our opinion and analyses not just on the operating environment within their industries but also on the big picture of what is happening in South Africa in the economic, policy and social spheres. And they want to  know our thoughts on the country’s future prospects.

They also tell us what they think and a lot of it is assuring. They have always done their research and many make the point that they understand our history and the need for particular policies to redress past injustices. They accept it as part of investing in South Africa and of course are already positive about the country because they are here looking to invest.

It’s the policy uncertainty that gets to them and they ask for our insight. The message we give is one of optimism but it’s balanced – we give the good and bad news. Let’s face it, it’s a hard sell to make in some respects and just in getting to the stage they’re at, these investors have already had a sample of SA’s heavy-handed bureaucratic requirements. Then they have to consider, among numerous other systemic inefficiencies, operating with an unstable electricity supply. The July unrest is also on their minds, as is corruption.

We always tell them of the measures being taken to address our problems but also of the obstacles that are causing things to move so slowly. However, in two problematic areas that are damaging to our economic growth prospects – our poor education system and rigid labour market legislation – we have to report that there is little progress being made.

But we always highlight our positive attributes and there are many important ones. We have a strong democracy and an independent judiciary, one which has withstood the pressures placed on it during and after the state capture era including numerous attacks on its independence by those implicated. More recently the judiciary has been attacked for more onerous, political purposes and we assure the investors that it will stand firm.

We have freedom of speech and a robust media as well as a strong civil society that holds government to account. In terms of investments, returns can often be far greater than developed and many developing economies. While the risk here is high, we have many advantages over other developing markets including a highly efficient private sector with sophisticated financial markets.

We also highlight our important gains on the reform front and just in the past year these have been substantial. The licensing threshold for embedded generation projects was lifted from 1MW to 100MW; the spectrum auction has been completed; a unit within the Presidency aims to cut red tape across all government entities; and Transnet has carved out the National Ports Authority as a separate entity and will soon provide third-party access to its freight rail network.

The mood of our visitors has been more and more positive lately and if we could increase the  positive news and decrease the negative, SA would be positioned exceptionally well to fulfil its potential as the gateway to Africa – something many of them still perceive us as being. 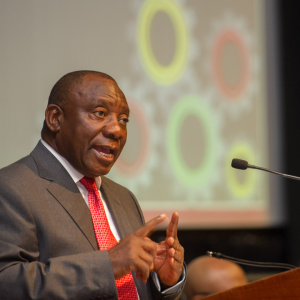 I fear discussions on a “new social compact at Nedlac with a new set of commitments will serve only to deflect attention from the important reforms and the R1-trillion infrastructure programme set out in the ERRP. I write in fin24 that of course there is so much more that we can do to accelerate our recovery, particularly in regard to improving education standards and rooting out corruption, but it will take commitments from each social partner at Nedlac.

National Director of Public Prosecutions Shamila Batohi’s briefing to Parliament on the extent of state corruption was chilling but not very surprising, I write in Business Day. President Cyril Ramaphosa needs to clear out those tainted by corruption from government ranks. We have a right to demand a clean government as corruption not only blocks economic growth, but its lasting damage is suffered by the poor.