For once I feel like business and government are not pulling in opposite directions.

It is sometimes tempting to believe that our country is stuck, unable to make the changes needed to get the economy growing. Yet this year I have noted a positive shift in the government’s view on what is necessary to solve our economic challenges.

The State of the Nation speech in January acknowledged clearly that business is central to sustainable job creation. President Cyril Ramaphosa was clear: “The key task of government is to create the conditions that will enable the private sector – both big and small – to emerge, to grow, to access new markets, to create new products and to hire new employees.”

This was a very positive statement on the role that business should be playing in the economy and the importance of government in enabling it. He pointed to the structural impediments that need to be fixed – reliable electricity, efficient ports and rail, scarcity of broadband, water quality. He spoke of the need to eliminate red tape that saddles companies with costs and damages their efficiency.

Then we had last week’s budget speech. Finance Minister Enoch Godongwana bravely held the line on improving the government’s debt outlook, keeping expenditure under control on key consumption lines while directing increased spending in a targeted way. This gives confidence that government is now in control of its massive debt and will be able to turn the trajectory on the debt-to-GDP ratio in the next few years.

It was also encouraging that the minister stuck to the plan to reduce the corporate tax rate from 28% to 27%. This had been announced in the last budget as part of a wider tax shake up to eliminate several tax incentives, so it is neutral overall. But it will be positive for business sentiment and bring South Africa’s corporate tax rates closer to international averages. Company profitability has been struggling, so corporate income tax has been shrinking in the overall tax mix. But reducing tax rates encourages companies to do more business in South Africa rather than in lower tax jurisdictions elsewhere. As the minister said, the corporate tax system must support companies to “grow, increase investment and employ more people”.

Collectively, the SONA and Budget reveal a closer alignment with the issues that business has been highlighting for a long time. One gets the sense that the message is getting through. The key issues that I have often highlighted that currently restrict employment and business growth have now been acknowledged by the president and finance minister.

Of course, the challenge is to turn this alignment into real changes that drive business investment. There is really nothing complicated about the conditions under which businesses will invest: it is when companies foresee a return in excess of the cost of investment. Lower tax rates instantly improve the return outlook. Improving the efficiency of the economy is a longer-term project to do the same. The less cost faced by business to move goods around the economy, the better for everyone and the better the case for investment. Reliable, low-cost electricity would dramatically help the case too.

For once I feel like business and government are not pulling in opposite directions. This gives an opportunity for BLSA and the rest of organised business to work together with government to deliver the conditions we need to grow the economy and create jobs.

Ultimately, jobs are what we need to deal with our overwhelming challenges of poverty and inequality in South Africa. I am more optimistic about the chances we now have to do that, with government recognising that it cannot sustainably be the sole source of employment growth any longer.

It is, though, time for action. In the energy market, despite the deep structural reform announcement last year allowing self-generation to a 100MW, the preposterous requirements from electricity regulator Nersa means it will be impossible to get any of these projects under way anytime soon and government needs to intervene urgently in this regard.

The wider challenge of getting rid of red tape that bogs down business without any corresponding benefits is a project in which I am keen to work with government to deliver. We should start with the remaining Covid restrictions on workplaces, which now frustrate businesses from bringing staff back to work and unnecessarily constrain employment. I look forward to working with government on the many other ways we can make South Africa a better place to do business and contribute to the economy. 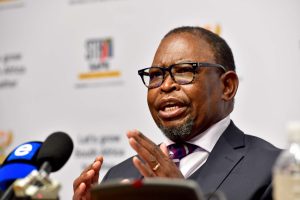 Producing a budget in a country with interest groups as divergent as ours is a difficult task, I wrote in fin24. This week’s budget was a fine example of National Treasury holding the line amid immense pressure.